Background: Spontaneous vertebral artery dissection has significant mortality and morbidity among young adults. Unfortunately, causal mechanisms remain unclear. The purpose of this study was to quantify mechanical strain in the vertebral artery 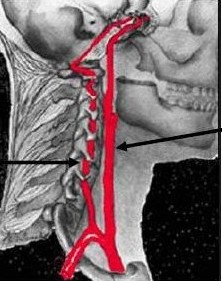 while simultaneously capturing motion analysis data during passive movements of the head and neck relative to the trunk during spinal manipulation and cardinal planes of motion.

Methods: Eight piezoelectric crystals (four per vertebral artery) were sutured into the lumen of the left and right vertebral arteries of 3 cadaveric specimens. Strain was then calculated as changes in length between neighboring crystals from a neutral head/neck reference position using ultrasound pulses. Simultaneously, passive motion of the head and neck on the trunk was captured using eight infrared cameras. The instantaneous strain arising in the vertebral artery was correlated with the relative changes in head position.

Findings: Strain in the contralateral vertebral artery during passive flexion-rotation compared to that of extension-rotation is variable ([df=32]:−0.61 b r b 0.55). Peak strain does not coincide with peak angular displacement during spinal manipulation and cardinal planes of motion. Axial rotation displayed the greatest amount of strain. The greatest amount of strain achieved during spinal manipulation was comparably lower than strains achieved during passive end range motions and previously reported failure limits.

Interpretation: The results of this study suggest that vertebral artery strains during head movements including spinal manipulation do not exceed published failure strains. This study provides new evidence that peak strain in the vertebral artery may not occur at the end range of motion, but rather at some intermediate point during the head and neck motion.